Hey there! You’ve reached this book midway through. To read from the beginning, click here.

“Okay, okay,” Chuck replied. “That makes sense, but what do we do about it?”

“The whole machine is very complex, with a lot of moving parts.”

“Try me. I’m a smart guy. I didn’t get where I am by being afraid to learn new things.”

“No, you didn’t, but you did get where you are by knowing what to make your problem, and what to make somebody else’s responsibility. You’re setting the route. Your team works on the engine, changes the oil and drives the car.”

“I… I resemble that remark.”

“Good. So, what you need is the map to your destination. Your team or somebody you outsource will handle the rest.”

“Good guess. It starts with realizing you’re taking the wrong road. Sticking with the car metaphor, this is a lot like the changes that happened when they put in the interstate freeway system. Old highways still run here and there. They’re interesting, but slow going with lots of stoplights. A smart road trip sticks to the freeways. With profit engineering, the old highways are outbound marketing.”

“And the freeways are?”

I mentioned in the last chapter how outbound marketing is either dead or sliding towards death. Through print, radio, and television spots still generate some return, only people with an interest in keeping the paradigm alive recommend marketing strategies that rely on these 20th-century methods.

We know this because consumers have spoken loud and clear on two fronts about how fed up they are with interruptive methods. They’ve voted with both their attention spans and their dollars, and given clearly superior responses to inbound marketing methods.

Further, they’ve voted with their…um, well, with their votes. The fed-upness of modern Americans has pushed legislators into passing a variety of laws limiting or forbidding some of the most common forms of interruptive advertising. A brief timeline of the trends and legislation illustrating this shift includes:

True, there is a sort of habituation going on with interruptive advertising. With the exception of telemarketing, few consumers report that this well-established type of marketing actually alienates them. We’ve grown accustomed to it, and some models are still going strong.

The best example of this in action is the pre-roll ads on YouTube. These are both interruptive and outbound, but can increase conversion rates by up to 20% because they are targeted specifically to people likely to watch the video that follows.

As you’ll see later, it’s possible to design your inbound marketing system to make lower-cost leads significantly more qualified than leads gathered via interruptive, outbound methods. More on that in a bit. Right now, let’s look at what we mean by outbound and inbound marketing. What are they? How are they different? How are they similar? What makes consumers so responsive to one and blasé about the other? 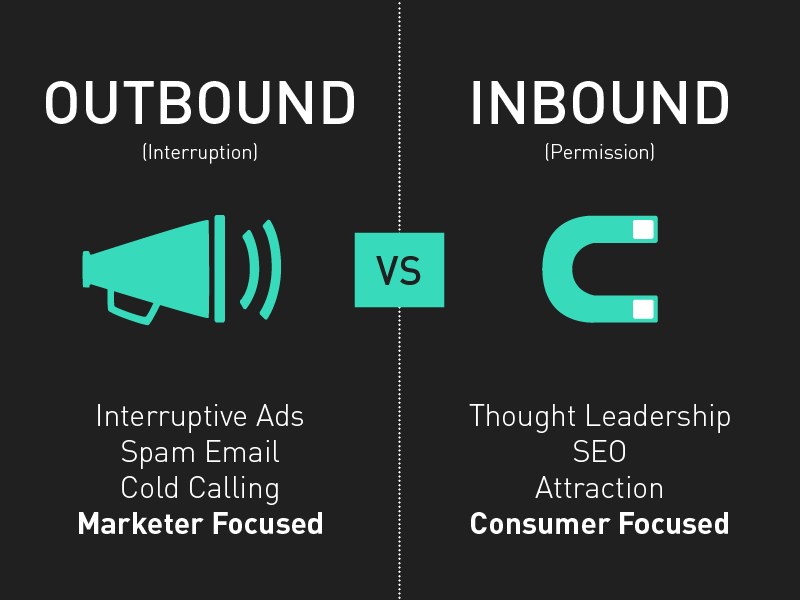 In broad strokes, outbound marketing was about telling consumers what they wanted and directing them to a place where they could buy that thing. It was kind of Orwellian, when you think about it.

Inbound marketing is about listening to buyers telling you what they want, then providing answers to their questions about that thing. It’s more like consultation or education than sales. Potential clients have some kind of pain, and they are searching the internet for a cure. They find your content (be it a web page, e-book, webinar, social media post, or whatever). The content helps them ease their pain, and they look to you as an expert on how to solve it entirely.

Drilling down a bit, we can see this play out in a variety of traits of modern consumers.

…Do Their Own Research

Outbound marketing worked in the last century because average consumers had limited access to information. If an ad spot made a claim, consumers had to accept it as truth. An ad making a false claim in this decade gets caught within moments of broadcasting the message. That by itself represents an important change in the landscape.

More importantly, strong profit engineers understand their best bet is in helping consumers do that research. This sets your brand up in the position of coach, advisor, mentor, and expert. It also lets you benefit from the outbound efforts of the competition, because buyers will use your material to research the claims made by others.

Inbound marketing lets consumers hold their own attention by offering content they decided to search for. This means you don’t have to fight the modern mobile mind by trying to force somebody to pay attention.  Instead, you work with consumers by hacking that tendency to check in…by becoming the place potential customers check into.

Word of mouth has been a powerful force since well before outbound marketing was even a thing. During the days when outbound was king, advertising capitalized on this both by encouraging referrals and through implied word of mouth in the form of testimonials from celebrities and paid experts. Social media has fundamentally changed how word of mouth works.

A single disgruntled client could poison your well for thousands. A delighted brand advocate could bring in hundreds of sales a year. More than any other aspect of modern digital buyers, this ability to push or destroy sales has changed how business growth works.

You Must Remember This

Put simply, outbound general marketing was the best choice during the 20th-century age of broadcast media. It got your message out to vast numbers and trusted that wide coverage to net a handful of interested consumers.

Inbound marketing is the best choice for 21st-century business development. It leverages the changes in modern media and consumers to connect you with the most interested and qualified people ready to make buying decisions.

It’s also important to remember that outbound campaigns add value in ways that broadcast campaigns simply can’t. They give potential buyers access to information, education, and advice beyond the scope of even the broadest broadcast media. This factor is vital to the success of your efforts, since it’s the foundation of the mentor/student relationship you want to develop with anybody interested in your product.